Teragon ChaosChimp is something completely different. This one doesn’t do anything to your sound. It simply tries to crash your system however it can. Why would you possibly want this? To prepare you for the worst. How will you handle a complete system failure in a live situation or high pressure session? Teragon ChaosChimp will test your rig—and your composure!

NOTE: This software is unsupported and is no longer being updated or maintained. It likely will not work on newer versions of macOS.

ChaosChimp is an audio effect plugin designed to cause problems for your sequencer. Seriously! It’s inspired by Netflix’s ChaosMonkey, which was built under the philosophy that instead of hoping bad things never happen, they should be forced to happen often so that one is better prepared for them. 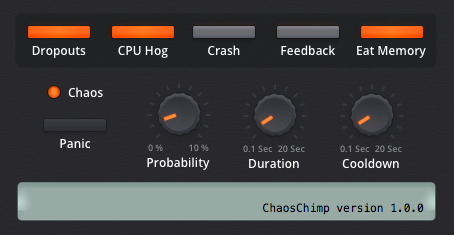 Why would someone want to run this plugin? To be fair, ChaosChimp should probably not be used on stage. But it should be used during practice and preparation sessions.

I’ve seen many headlining DJ’s let down by their gear onstage. I won’t name any names, but let’s just say that it can happen to the best of us. In some cases, they just slammed their laptop in disgust and walked off the stage. Other times, the sound technician had to frantically mute the house speakers to prevent feedback or satan saws (a cruel term for when a soundcard’s AD/DA unit stops receiving new data and keeps outputting the last buffer received, causing a horrendouse sawtooth-type noise). Sometimes the music just stopped and everyone on the dancefloor stopped and looked around. Does any of this sound familiar?

Most of the time, when this happens, the disgraced DJ’s exits the stage, proceeding to lament on Twitter/Facebook and complain about how buggy software X or hardware Y ruined a perfect evening. Screw that. Always have a plan B ready, and train yourself how to react when disaster strikes. ChaosChimp is designed to cause such disasters at random intervals, allowing you to prepare for them in the safety of your own studio.

Also, ChaosChimp can be useful for sequencer developers to simulate naughty or misbehaving plugins.

At the top of the plugin are buttons to disable or enable the following types of chaos:

ChaosChimp will run the scenarios at random intervals according to the values set by the three knobs:

On the left side of the interface, there is a light which will illuminate when a scenario is running. Below this light is a panic button, which will stop the current scenario if you find it to be too overwhelming for your system.

For best results, place it on your master output channel and tweak the settings before playing anything.

ChaosChimp is licensed under the GPL2. Further details can be found in the LICENSE.txt file distributed with the software.

Teragon Audio is not responsible for any damage (either hardware or software) caused by using this plugin. Use at your own risk, and always keep backups!